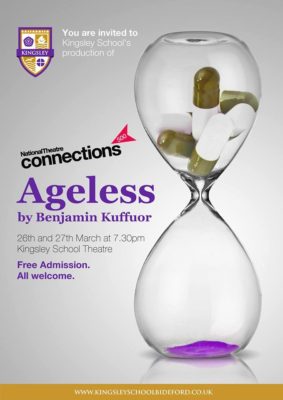 The Kingsley cast will be performing “Ageless” – a NTConnections play – on 26th and 27th March at 7.30pm in the Kingsley school theatre.
All welcome, free admission.

‘Generations to come will view this as the moment that the curse of ageing was removed and the world was able to look to tomorrow without the fear of a failing mind or body.’

In a not too distant future, Temples pharmaceutical corporation has quite literally changed the face of ageing. Their miracle drug keeps its users looking perpetually teenage. With an ever youthful population, how can society support those who are genuinely young?

A play which questions what it means to be young and the ways in which generations collide.

Why I wrote this play

‘Writing for a young cast forced me to think about a premise that interrogated the idea of youth. This led me to think about how ageing is viewed in the West as something to fear: many industries owe their existence to our quest to avoid ageing in a cosmetic sense and increasingly in a more cerebral sense too.’

Benjamin graduated from the National Film and Television School in 2011, and his first project following graduation, YOUNGERS, was developed by Big Talk Productions for E4. Prior to his time at the NFTS, Benjamin’s first short play, BOBBY JAMES, was produced at the Theatre Royal Stratford East in 2007, and he participated in the Young Writers’ Programme at the Royal Court Theatre in 2008.

Benjamin is currently developing projects for Television, Theatre and Film.