The day finally arrived for our Kingsley Judoka, to travel and compete at the Commonwealth Judo Tournament. The event was hosted over 5 days of competition at the University of Wolverhampton in Walsall and involved over 1000 athletes across the six categories of aged banded events.

Teams attending included squads from as far as New Zealand, Australia, India, Malta, South Africa and many other Commonwealth Nations as well as all the Home Nations of England, Scotland, Wales and Northern Ireland.

Our Kingsley team had been planning and preparing for months from arranging, training trips, England judo kit, backpatches to transport and hotels, everything was in place to help maximise the best opportunities for the team to compete at the Commonwealth Games.

The Kingsley squad were representing Team England in the Pre-Cadet under 15 age category competition on day 4 of the event on Saturday. It’s taken years of courage, determination and lots of training to reach this milestone. So, no matter what they would face in terms of opposition or competition nerves, our team must feel proud to have this exceptional opportunity to compete at such a high-level tournament.

We left Bideford nice and early on Friday morning as a team, unfortunately the traffic was quite busy, so we just arrived in time for the first official athlete accreditation check and a jump on the test scales. After a quick look around and check on the venue set up and an opportunity to catch up with friends, we had a team lunch prior to the official weigh in and collecting of the Judoka England Team kit, before meeting up with parents and heading off to our team hotel for a relaxing evening meal all together.

Super Saturday arrived and our Kingsley team headed off to face the mighty challenge of the Tournament arena, which itself looked an amazingly professional set up, far bigger than any event which our team had experienced before.

We arrived at 8:15am and went straight into warmup preparation phase with Amie McMurray and Tristan Walters both scheduled to start at 9:30am.

First fight of the day was for Tristan, who faced South African, Ethan Ian Hattingh in the opening round of the boys under 34kilo division. The South African boy made a positive gripping start, taking a leading dominating position over Tristan’s head which created a difficult situation for Tristan. However, this was soon changed once Tristan created some space with some good foot work and a switch in direction to throw with a lovely low seoi-nage to score Ippon and win the fight. Tristan went onto reach the semi-final against a very strong Judoka from India Anurag Sagar and despite a brave effort the strength and power of the Indian boy proved too much Tristan on this occasion. Tristan returned for one last bout as he faced Evan Price from Wales in the final for the Bronze medal. It was a match he knew he had to produce his best performance and stay match focused. The fight was quite tactical with both boys fighting hard to gain the dominate grip and with an early counter opportunity to score just missed from Tristan after Evan produced a leg grab to avoid being thrown to save going a score down. Tristan continued to gain confidence and only once was put under a possible scoring pressure. However, as the fight went into the last minute and with his opponent 2 penalties down, Evan pressed forward, and Tristan created another brilliantly timed low seoi-nage to score waza-ari 5 points. Tristan then used his experience to control to final few attacks from his Welsh opponent and win a Commonwealth Games Bronze Medal.

Amie McMurray was next to step into the arena in the girls under 40kg division against Scotland’s Kirsty Lawson, Amie had previously beaten Kirsty on route to becoming British Champion in 2017. This was much closer contest between the two girls, with Kirsty defending Amie’s attacks and powerful groundwork attacks. The fight was getting frustrating for Amie who continued to work hard to create left sided throws against Kirsty grips, but as the fight went into the last few seconds a debatable counter score against Amie cost her a waza-ari. However even more annoying for Amie as she had managed to turn the situation into a turnover opportunity, but this was stopped by the referee just prior to Amie producing a finishing position which would of certainly given Amie the winning opportunity, and with just seconds left on the clock the fight was over with Kirsty holding onto the victory.

Amie then faced rival Amelia Alder. Amelia had defeated Amie in the 2018 British Championships final, so this was going to be another very tough battle for Amie who was trying so hard to throw her opponent. Amie was battling fiercely working her seoi-nage as well as her groundwork, but with just 18 seconds left, Amelia produced her only real attack and scored from a continuous driving action taking a waza-ari. Amie then produced a last quality positive attack and had to try and throw a big score, and as her O-Uchi-gari started to drive Amelia backwards, she manage to counter turn Amie off the attack for her second waza-ari and leave Amie desperately disappointed to lose a medal opportunity in the competition with Amelia going onto win a Bronze medal and Amie having to settle for 9th place overall.

In the afternoon Jersey Ledger was competing in under 52kg division. Jersey equally had a hard start to her competition by being drawn against current British Champion Charlotte Jenman in the first round. Jersey faced the battle very nervously, trying to start the fight well, but Charlotte was able to complete a good throw to win the opening bout, and she also went onto win the Gold medal. Jersey had to quickly refocus and try to get her thoughts together and face her next opponent Indian fighter Saan. This was a much more positive performance from Jersey, who was able to get involved in a good battle with her Indian opponent. The fight was quite evenly balanced with Jersey dominating a better exchange in groundwork, however Saan had scored with an Uchi Mata throw, Jersey continued to work hard but she couldn’t pull back the score by the end of the 3 minute bout, she had fought hard in this contest, but unfortunately struggled to find her best form and it wasn’t to be for Jersey today who was eliminated from the event and had to settle for 12th place overall.

Our final competitor Caitlyn De’Ath had to wait all day to start her competition and had an equally tough opening bout with Nicole Wood. Caitlyn matched her more experienced opponent well during the early exchanges in the bout, however a good driving hip kata eri seoi nage caught Caitlyn for Ippon. Caitlyn next faced Isabelle Rhodes-Fussell, she had previously defeated Caitlyn, and as the battle started it was going to be another tough contest. Isabelle caught Caitlyn in a holdown, but a big effort to escape help Caitlyn avoid going a score down. She then reacted well and dominated the hip throws and eventually controlled her throw to score waza-ari and hold onto the victory. Next up was a fight against Tecca Ford. Caitlyn went out very positive with new found confidence from her previous win, however over committed her open sequence of attacks and was countered for Ippon, this was very disappointing but a clear learning experience from the event and Caitlyn eventually finished in 9th place overall in the girls under 63kg.

Our Kingsley team came up against some outstanding opposition. The level was incredibly strong and to match yourself at this level took an amazing amount of courage, determination and confidence. 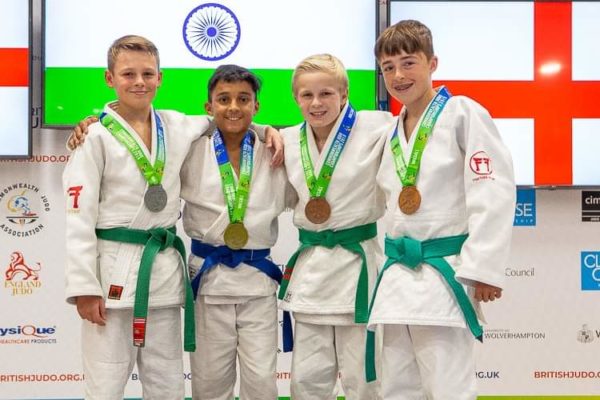 It was a fantastic experience for the team, I’m proud of their efforts and certainly hope now it inspires them all to refocus their Judo and move forward with clear goals for the future.

Thank you for everyone’s team efforts over the past 3 months, as we tried hard to prepare for the Commonwealth Tournament. From Julia with the running programme to Andy helping to take kids to Reds training. To all of the judoka for getting in early on Mondays for Strength and Conditioning, All these little extras help, but at the end of the day, the mindset on the day and the quality and form of opposition can’t be accounted for, It was without question the hardest field of opposition in any home nation competition we have ever took part in.

Your courageous efforts and determination stood out in 4 different situations, each of our team faced four different difficulties. We now have time to self-reflect and have an opportunity now to really pull together. The group are so happy together and when you travel with them and watch their tight bond in friendships with each other and a few invited kids from other clubs you see why they love the sport and the Journey which they all enjoy together.

It should inspire them to want to improve their weaknesses and as a TEAM….Together Everyone Achieves More…

Let’s brush down the disappointment of competition and move forward for the future, each of the team are going through the same emotions as several other Judoka, some will quit!!!!!! But the strong minded and courageous ones will want to revenge defeat and make a point to many people. This is what makes a champion and our four Kingsley Judoka have that character to return stronger.

If you require any further information please contact me