A very sad week for all of us in the school and my thanks to all of you who have expressed your support for Gabriella and her family at this very sad time. We will continue to do all we can to support them.

I was delighted to present Elise with a signed copy of Michael Morpurgo’s new book – “The Fox and the Ghost King”, given to her as a thank you for her beautiful illustration of a fox presented to him at the Appledore Book festival last week. Who knows, maybe they’ll be a character in his next book called “Elise”?

It was also a significant Celebration Assembly because I was able to present our very first Bronze Awards for collecting House points to both Freddie and Elise in Year 2. Well done to them both and I look forward to presenting more in the near future.

This week has definitely been hotly anticipated by Year 6 and not without cause, as they have been at Kilve Court on their residential trip since Wednesday. I was lucky enough to be able to escape the bonds of my office to visit them yesterday afternoon where I was able to watch them on the High Ropes course and then playing games in the beautiful afternoon sun. Actually, we all joined in, and so whilst it was Mr Wilson’s aim to exhaust the children, it was, in fact, the ageing and creaking adults he managed to tire out. It was clear that not only were they having a great time, but that they were engaging positively and actively with everything that was on offer (particularly the home baked chocolate brownies served up for tea). We look forward to welcoming them back to school later this afternoon, by which time I should think they will be exhausted and ready to sleep for the rest of the weekend. My thanks to Mr Wilson and Miss Braunton for their energy and enthusiasm in leading this excellent experience for the children and wish them both a restful and relaxing weekend to recover. 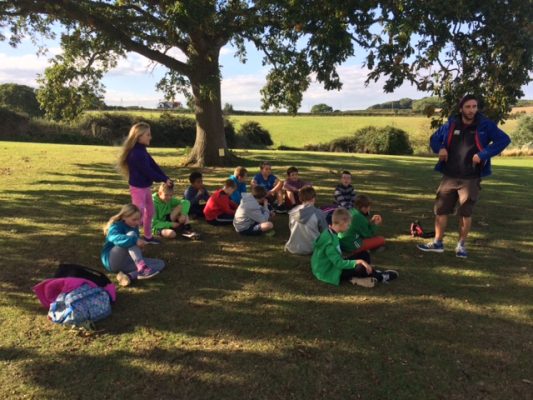