There’s an awful lot of superstition that goes with a date like today’s.  I remember very vividly when I first became aware of the superstition. I was aged seven and along with my best friend I was given the responsibility of cleaning out the cage containing our class stick insects. This did not go well, with a number of fatalities and escapees to the extent that I was banned on the spot, by my class teacher, from ever going near the poor surviving stick insects ever again. On that one fateful morning, in a small North London classroom, my actions probably initiated a whole raft of enquires leading to strict new procedures and rules on keeping animals and pets in classrooms – it’s even possible that the whole national obsession with Health and Safety and the need to risk assess all aspects of our lives now began as a result of my innocent but ill-judged attempts to give those poor creatures a cleaner cage. But the day’s events didn’t end there. That afternoon we had Art and this entailed covering our desks – the ones with the lift-up lids and our books underneath – with newspaper. We then each had a pot of water and a palette on our desks for painting.  Someone should probably have told me that it was not a good idea to open my desk with the water pot still on it, but they didn’t and I did. The water went on the floor, onto the girl in front of me, into my desk, and all over my painting. In the ensuing chaos and in trying to stop the water going everywhere I knocked my friend’s water pot over as well; the contents of which drained into his desk. I was, by now, utterly bemused. I could not explain or understand why everything was going wrong. And that’s when my friend, who was, given that the entire contents of his desk was having to be arranged over the class radiator to dry out, extremely good humoured about the whole situation, said the fateful words that became etched into my imagination and have subsequently left me very nervous at the mere thought. “Well it is Friday 13th!”

Looking back there is a much better explanation – I was extremely clumsy.  My co-ordination skills were not well developed and perhaps on the verge of what we might now describe as dyspraxia. Many years later I decided to learn to juggle – not because I wanted a career in the circus, but just to prove that I could. And I did. It took time, patience, a great deal of practice, some embarrassing incidents and breakages on the way, a great deal of resilience and an unwillingness to be defeated so that, eventually, I mastered juggling with three balls. I am not a great juggler and I quickly found that teaching juggling was just as much fun as juggling; the look of excitement when that first juggle is achieved is priceless. 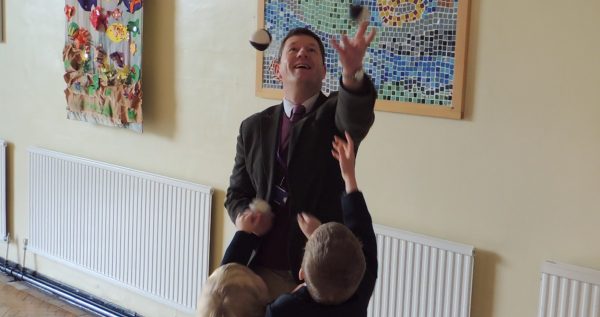 And in teaching juggling you realise how many important skills are involved; balance, hand-eye co-ordination, rhythm, throwing, catching, and maintaining a calm demeanour as chaos ensues around you. It can be a very relaxing, de-stressing activity – your mind is completely focussed on the moment and all other thoughts and worries slip away.

So, I was delighted by the number of pupils who joined me for Juggling Skills on Tuesday evening. I explained that it is unlikely that they are going to learn to juggle immediately; that we need to develop the skills around juggling first to get to the point when we can juggle; it’s a journey, but one that’s worth making and if, like me, you are not naturally well-coordinated, then all the exercises we do won’t just help you to juggle – they will feed through into better co-ordination and self-control.

Have a great weekend and weather permitting we’ll see you on Monday.