In today’s assembly I asked the pupil’s to think about how oak trees can live for over a thousand years; and so if an old oak tree could talk, what might it be able to tell us about how the world has changed in that time.

I have always loved oak trees, both as objects of great beauty in the landscape, but also as a source of beautiful wood.  Somehow, in their slow but steady growth, their great resilience and their amazing strength, they really do seem to symbolise so much that is good about our world and in particular our country. No wonder oak leaves and acorns are so often are used as symbols for organisations, such as the National Trust.

At my last school there was a great oak tree that overlooked the playground, like a centurion on constant guard. On my very first day there, the oak tree was struck by lightning, but happily survived unharmed apart from a small amount of charring at the base. It turned out there was an old iron cable, that had been left in the ground, and which the tree had grown around. This old cable carried the shock away from the tree. Unfortunately for us the other end of the cable was buried in the foundations of the swimming pool changing rooms and so a lump of molten concrete was blown out of the floor, and distributed around the walls and ceiling in little globules. Had anyone been there it could have been very dangerous, but it was still the holidays and so we were very lucky. Of course I had to suffer many jokes about this being God’s judgement on my headship.  But the tree stood firm and continued almost to the end of my time as head. And then one day the groundsman arrived with the worst possible news; my oak tree, the one that had survived being struck by lightning, needed to be chopped down. It had a disease and was in danger of falling. Sadly, I agreed. We couldn’t take the risk of the tree falling with so many children around so often. The tree surgeons arrived and began to remove the top of the tree until all that was left was the trunk. Jokingly I said they could stop there – maybe we could carve the rest into a sculpture.  Surprisingly the tree surgeon agreed – after all at that height the tree was safe. And so my oak tree survived again with new shoots springing out at the top. And it’s still there now and very much alive and unaffected by the disease it seems!

Last week Mr Wilson, after a very generous donation, planted an oak tree with the help of some pupils just by the children’s playground. Maybe one day far in the future, this oak tree will stand centurion over our children’s children as they play, just as my oak tree did. 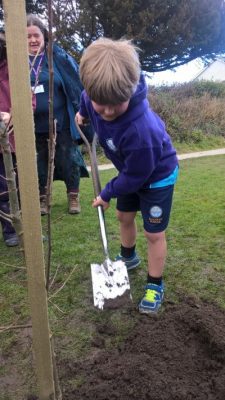 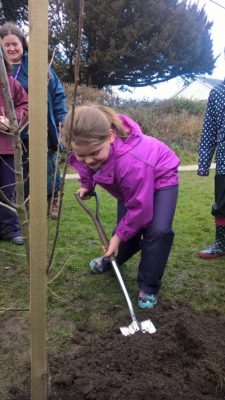 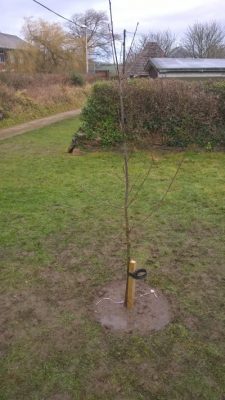