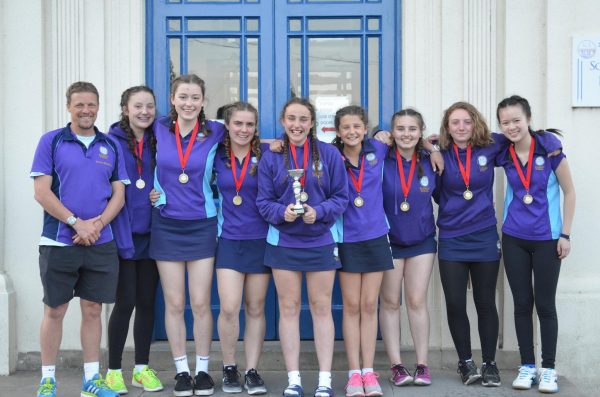 The smiles say it all!!! Congratulations to Kingsley School handball team, who returned from the South West Handball Championships in Paignton last night as the South West Champions. They are now through to the Nationals on 10th June representing the South West.

The U15 girls qualified for the South West Handball Championships in September 2016. The competition is getting bigger and tougher each year as the popularity of the sport steadily increases.

Yesterday, at the Championships, we first had to get out of the group stage. Each game was a straight 17 minutes. We spent all of our three games absorbing pressure for the first two minutes but then really coming alive after that. We literally went from 2-2 and struggling, to relaxing and taking teams to pieces. The results were 8-3, 10-3 and 8-3 to qualify for the final.

Stroud won their group to meet us in the final. Due to the playing schedule, they had an hour to recover and we had our last group game at 3.40pm and then the final at 4pm!! I did ask for a change to allow recovery but it was not allowed… So we had to play the reigning SW and National Champions with no break…tough.

The final started at breakneck speed. Jasmine came close to scoring, quickly followed by Krystal who made an excellent save to keep them out. Ruby went close at their end for them to attack back once more. Alice was controlling her fellow England Centre brilliantly and this was the difference. A quick steal of the ball and Alice was through to score. Pressure eased. But, Stroud came straight back to level things up. Half time came and the score was 4-3. We were in control. Megan was holding the ball up brilliantly under immense pressure and Ruby had scored some great goals. However, our mistakes of passing across the field to allow them to intercept or shoot too early had allowed them to stay in the game. The second 10 minutes started the same as the first, brutal tackles wonderful blocking and sharp shooting from both sides. They scored to even things up. But, then we started to get on top with two goals in quick succession – finally breathing space at 6-4. Their England players started to up their game and really forced us back. With just 1 1/2 minutes to go, they scored two rapid goals to even the game and snatch momentum towards them. Krystal saves, Poppy makes a great tackle against a far bigger opponent, Roxy saves a breakaway attack, Ruby blocks – frantic, frenetic play! Then we get a chance… Megan receives the ball and holds off two players to turn and attempt the shot that could win the match, only to be dragged to the ground. An age passes and finally, the referee awards the penalty. 14 seconds left on the clock and Alice has the pressure to score against the England keeper to put us nearer to the win. The huge crowd, that had been screaming so loudly before, fell silent. I could almost feel poor Alice’s heart beat as she picked up the ball. The whistle goes and she smashes it into the bottom corner leaving the keeper no chance. One last attack from Stroud and … miss. The final whistle, a 7-6 win, and we are SW Champions and off to Nationals on the 10th June. 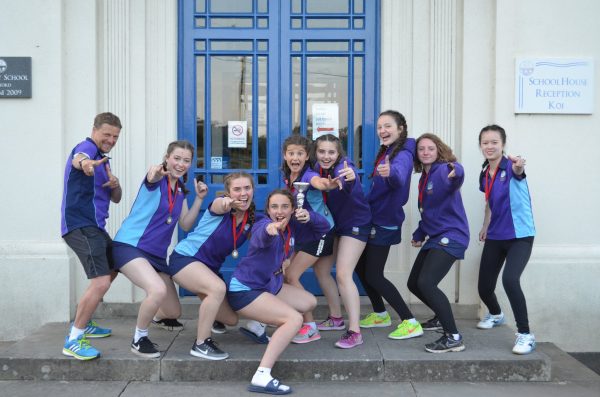 Well done all and let’s smash the next round too!!