This year’s Inter County team championships once again produced an amazing atmosphere, with lots of exciting judo on display.

The event allows the best County athletes to combine within a team situation across 3 age groups, from under 12, under 17 and seniors. The teams then compete against each other in a round robin system to determine the eventual winners in each age group.

Kingsley School Judo Club was very well represented across all 3 Devon teams at the event and certainly helped Devon to succeed in 2 of the 3 events.

In the under 12 team, Kingsley was represented in 6 of the 9 weight categories in the team line-up.  The team was in remarkable form and went onto win the Gold medal, which was one better than last year’s Silver medal result. The Devon team defeated Bristol 8 – 1 in Round One, then produced a whitewash victory over Somerset 8 – Nil before beating defending champions Gloucester 7 – 3 in the Final. This was a close battle in the lightweight groups with Gloucester taking a 2-Nil lead early on before Oliver McQulliam, Aria Mitchel and Louis Mathers all won their contests to secure the final result and crown an amazing achievement for the team. It was great to see our Kingsley judoka remain undefeated during the tournament and show great determination, all fought really hard to help the team to overall victory.

In the Under 17 event, Devon also produced a marvellous Gold medal performance, the team of 7 involved 3 Kingsley Judoka, who all played a vital role in the squad winning the title. The day for the team started well when in the first round the team defeated the defending champions Gloucester 4-2. The team then overpowered Wiltshire 5 – 2 before beating Somerset in the Final contest 6 -1 to take the Gold medal. Our Kingsley Judoka all produced some excellent attacking Judo on route to supporting the team victory with wins from Mark Wild, Leon Mlodzian and Cameron Lavelle who showed great potential against some good opposition.

In the Senior Men’s team Kingsley Judoka Michael Edwards won 2 of his 3 contests as the 7 man team eventually finished in Bronze medal position after losing a narrow contest with Bristol who went onto win the title. 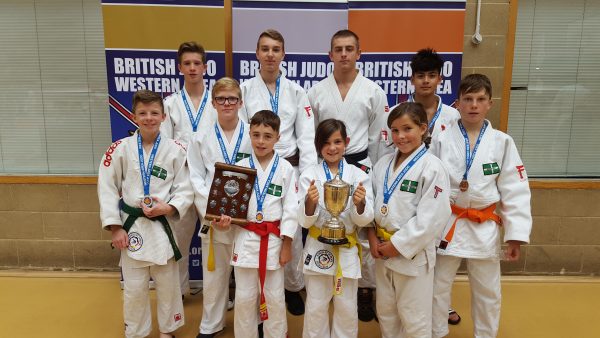