What’s in a name?

According to the plaque outside the main school building, Kingsley School was founded in 2009. Whilst this is, strictly speaking, correct, it is definitely not the whole story. Kingsley School did indeed come into being in 2009, but the school contains the “DNA” of 3 other Christian schools in Bideford. Stella Maris Convent was a Catholic school which, in 1927, replaced the Ursuline Convent, based in Northdown Hall, which is still in situ at the bottom of Northdown Road and is today part of the Stella Maris Court close. This building was also the home of Charles Kingsley (1819-1875), after whom the current school is named. Stella Maris Convent became Stella Maris School in 1990 and then, in 1994, it merged with Grenville College.

Grenville College was a boys’ school founded in Bideford in 1954 and named after the famous Elizabethan sea-captain, Sir Richard Grenville. It was purchased by the Anglican Woodard Corporation in 1965. The girls from Stella Maris joined Grenville in 1994.

The third school that makes up Kingsley’s “DNA” is Edgehill College on which site the current school still stands. Edgehill Girls’ College was founded in 1884 by the Methodist Bible Christian Movement who also founded our sister school, Shebbear College, in 1829. Boys were welcomed into Edgehill ‘s prep school at Shawleigh from 1968 and into the senior school from 1992.

Kingsley School came about when the Woodard Corporation decided to close Grenville College and sell the site for housing development. There was never a full merger in the legal sense of that term, but many teachers and pupils did transfer across to the newly named Kingsley School when it opened in 2009. When I arrived as Headmaster in January 2017 and began to understand more fully the history of Kingsley School, I was quickly aware that we have a rich historical and pedagogical heritage from Stella Maris, Grenville and Edgehill.

This heritage has been reflected in the design of our new quartered school crest which will be on our new school uniform that many of you came in to school to see for yourselves this afternoon. 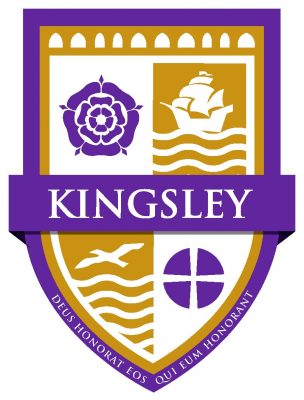 The rose in the upper left quadrant of the crest is taken from the Stella Maris crest; the ship afloat from the Edgehill crest and the albatross from the Grenville crest. The bottom right quadrant is the Methodist Cross and represents our pride in being owned by the Methodist Independent Schools’ Trust (MIST). We have also come up with a new Latin motto: “Deus honorat eos qui honorat eum” which means “God will honour those who honour him”, which we feel is a very fitting motto for a school with such a strong Christian ethos and a strong focus on the importance of character development.

Our new uniform will be introduced in September 2018 and we will allow a two year transition period during which time pupils may continue to wear the current uniform; this is, of course, to minimise the cost of purchasing more new uniform for parents who may have only recently bought the current uniform. During the transition period parents will still be able to purchase items of “old” uniform, but we will not be replacing this stock as it is sold. After this two year period, from September 2020, all pupils will be required to wear the new uniform.

I am really excited about our new uniform and our new crest. Please do not be in any doubt: Kingsley School has been here since 1884, not 2009 and we are very proud of our educational heritage which enables us to look to the future with growing confidence. We want to be proud of who we are and where we have come from and we want our pupils to be proud of wearing our new uniform and representing the school in all that they do.